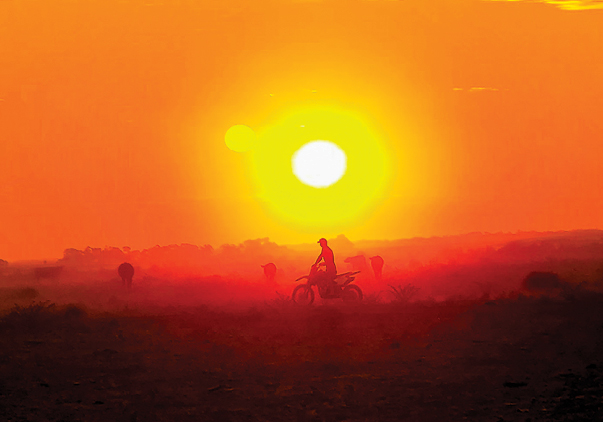 Explore the beginning of the outback in the vast Carrathool Shire. Within the 19,000km2 you will find five unique towns and villages – Goolgowi, Merriwagga, Hillston, Rankins Springs and Carrathool. Carrathool Shire welcomes travellers to take time out from their journey into the outback to discover the uniqueness of the three towns and villages that lie on the Kidman Way. Enjoy heritage walks, murals, art, sculptures and memorials that celebrate our community and our history. Hillston is known for its very long, straight main street. With the Lachlan River on its doorstep and two parks providing picnic areas right down to the river’s edge plus exceptional facilities, the town becomes a great place to stop and linger. One of the parks is the former site of the original Hillston Hall, and this now has well landscaped gardens which lead to the swinging bridge across the River. On the other side of the bridge is a small shady area which features “animals” made from fallen trees. You’ll recognise a crocodile, large redback spider and an ominous prehistoric monster. 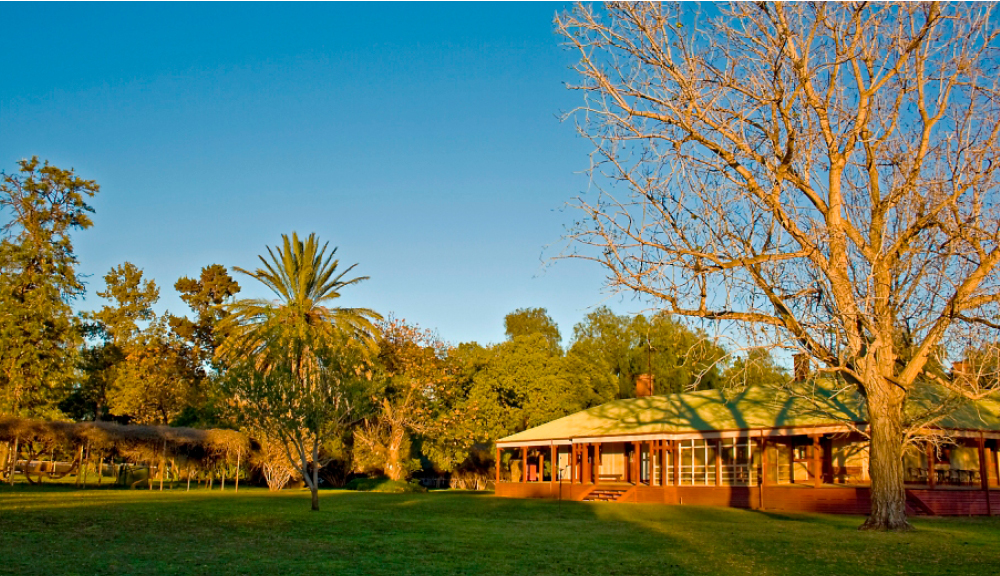 An exploration of Big Willandra’s past isn’t complete without a visit to the shearing precinct. After you’ve enjoyed the elegant rooms at the Homestead, wander through these beautiful rustic buildings that tell a different story – about the life of the wandering shearers. You’ll see the woolshed, overseer’s cottage, shearer’s quarters and ablution blocks. There are plenty more rooms to explore; check out the dining room and kitchen, the cook’s cottage and meat house. A visit to the Black Stump Memorial will provide visitors with details of the gruesome tale that gave Black Stump Country its name. A bullocky passing through the area in 1886 left his wife, Mrs Barbara Blain to make camp for the night while he tended to the cattle. The day was hot, windy and dusty, and while his wife prepared the evening meal, the camp fire raged and she was burnt to death. When people expressed their sympathy, the bullocky simply said “When I returned, my wife was dead, she looked just like a black stump”. And so the Black Stump legend was born. Mrs Blain is buried in the old Gunbar Cemetery. 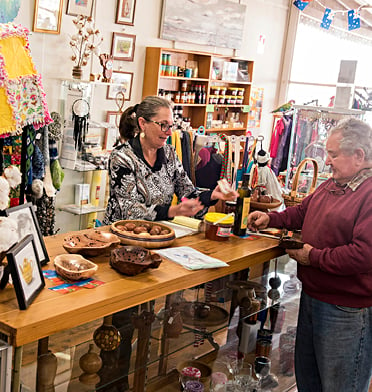 The Red Dust and Paddy Melons Gallery is a volunteer run gallery in the main street of Hillston. Check out the fabulous works of the members of the Hillston Creative Arts Council, including paintings, sculptures and craft. The art and craft is for sale, and highlights the beautiful flora, fauna and scenery of Hillston and surrounds.

This unique gallery in the Riverina region of NSW displays junk art from local artist Raymond Lamont – known in the community only as Wally. Wally has always had an interest in creating sculptures and artwork out of old farm machinery, scrap metal, or discarded tools, and has turned his passion into an art gallery in his hometown Rankins Springs. 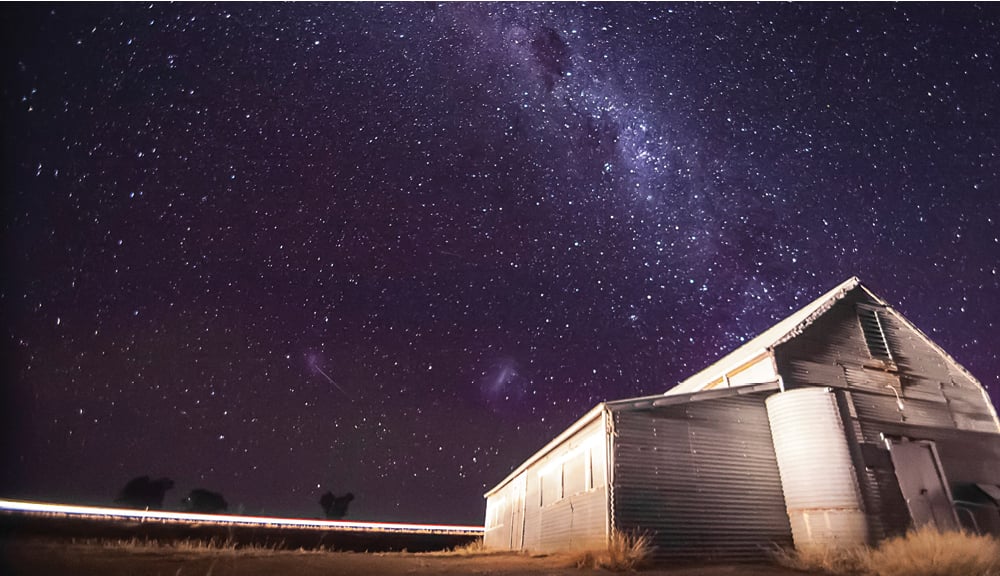 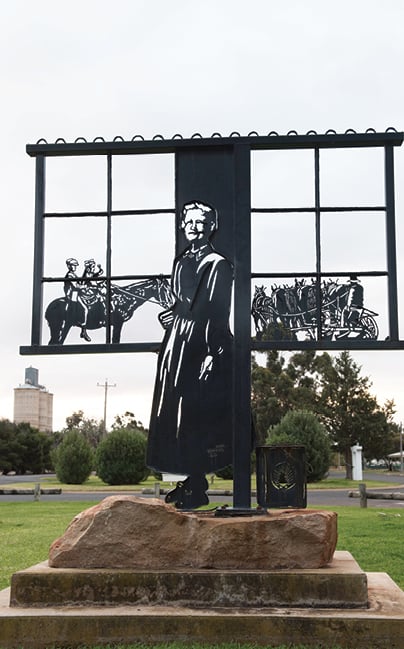 On the banks of the Lachlan River, Hillston, settled in 1863, is a town with a colourful history, that has been given new life by an extensive irrigation system. Now a major fruit and vegetable producing region, its orchards and citrus groves stand in stark contrast to their parched surroundings. Here you can also experience some of the natural beauty of the Outback, including wildflowers, majestic river red gums, lots of birdlife plus, of course, kangaroos.

The Lachlan River meanders its way through the middle of town, with two leafy green parks situated on its banks. Take a stroll over the newly refurbished Swing Bridge at the Hughie  Cameron Park for a closer look, and enjoy Councils 1.2km Riverside Walking Trail or enjoy a spot of fishing down by the Desatholon Park reserve.

There are many reserves located along the Lachlan River which allow access for fishing and camping, please remember to take your rubbish with you so everyone can enjoy our natural environment.

The man-made Lake Woorabinda is an aquatic playground when river conditions allow it to be filled, with water skiing during the summer and a walking track showcasing the abundance of birdlife including pelicans, black swans, and cockatoos.

is one of the four smaller villages within Carrathool Shire, and is located at the crossroads of the Mid-Western Highway and the Kidman Way. Goolgowi is approx. 6 hours north of Melbourne, 7 hours west of Sydney and just 30 minutes north of Griffith. Situated on the north-western edge of the Murrumbidgee Irrigation Area, Goolgowi is primarily a wheat farming and sheep grazing area; however, over the past decade, agri-industry has diversified to include substantial areas for olives, walnuts, almond production, cattle feedlots and grape growing. Within the village itself, there is a pub, an ex-servicemen’s club, service station, post office, caravan park, swimming pool, skate park, fitness equipment and walking tracks.

The village of Carrathool was gazetted in 1925, following the construction of the railway line between Griffith and Hillston. The Goolgowi Railway Station opened in 1923 and closed in 1979 following the cessation of passenger services on the line. The line is now used primarily for grain haulage out of the Shire. Follow the Heritage Trail around the village to discover the history of Goolgowi. Located outside the Carrathool Shire Council offices are five panels to celebrate the town’s centenary in 2006, each of the panels are dedicated to one of the five towns and villages in the Shire.

is one of the villages within Carrathool Shire, located halfway between Goolgowi and Hillston. Merriwagga lays claim to be the very heart of Black Stump Country. Black Stump Hotel caters for the thirsts of local farmers and travelers alike. The hotel boasts the tallest bar in the Southern Hemisphere, standing a lofty 1.3 metres high. Local legend has it that the original publican built the bar this high, so that local ringers could ride their horses right up to the bar!

The village of Merriwagga was surveyed and gazetted in 1924, following the construction of the railway line from Griffith to Hillston. Merriwagga was a small service centre and social hub for the surrounding farms. The name Merriwagga is believed to have come from it being on the south west corner of the (then) vast Merri-Merrigal Station, and close to a local watering hole, the Wagga Tank.

A visit to the Black Stump Memorial will provide visitors with details of the gruesome tale that gave Black Stump Country its name. A bullocky passing through the area in 1886, left his wife Mrs Barbara Blain, to make camp for the night while he tended to his bullocks, the day was hot, windy and dusty, and while his wife prepared the evening meal, the camp fire flared, causing her skirts to catch fire, and she was burnt to death. When people expressed their sympathy to the bullock, he simply said, “When I returned, my wife was dead, she looked just like a black stump.”

is at the foot of Mount Conapaira between Goolgowi and West Wyalong. The village is on the Mid Western Highway near the eastern boundary of Carrathool Shire, and is 6 hours both from Sydney or Melbourne and just over 30 minutes from Griffith. Rankins Springs is known for its native birdlife with designated bird hides strategically located around the area. There is also a pub, general store, post office, caravan park, motel, service station and gallery.

The original Rankins Springs village was established in 1870 as a service centre for surrounding farms on a site about 10 kilometres north west from the present location. The village moved to its current site in 1923, following the construction of the rail line from West Wyalong. The railway closed in 2004. Follow the heritage markers around Rankins Springs and learn more of the history of this small village. Travelers passing through can make use of the picnic and toilet facilities in the well-kept shady parks; the general store and service station provides visitors with the essentials and the Conapaira Hotel is a great place to stop for a meal or cold drink. For those wishing to stay a night or two, there is a caravan park and a motel.

Carrathool is now a sleepy village of 250 people, but was once a bustling country river port and then a railhead town of several hundred people, surrounded by large wool stations, and tending to the transport needs of huge wool clips and grain harvests from hundreds of miles around. Carrathool even looked after the freight of the gold bullion and other precious metal production from the Mt Hope goldmine to Melbourne by Cobb and Co coach.

The village of Carrathool was originally located on the banks of the Murrumbidgee River. During the 1850s Carrathool was one of the earliest river port towns established along the river to serve paddle steamer traffic on the river. In 1882, with the arrival of the railway, a new village was established two miles north of the river. Carrathool was proclaimed on 20 March 1885, and became the railhead for an extensive area. Enormous quantities of wool, wheat, timber and livestock were shipped by rail. Take a drive over the new Carrathool Bridge, opened in 2019 and built next to one of the last lifting bridges remaining in Australia. Built to replace the punt, the heritage-listed Bascule Lift Span bridge was completed in 1922 and the lift span last opened for river traffic in the 1930s. 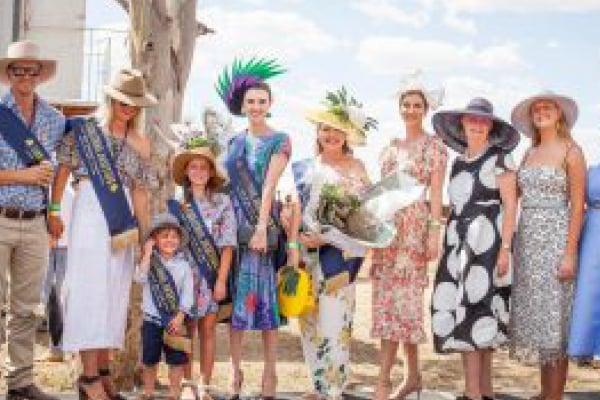 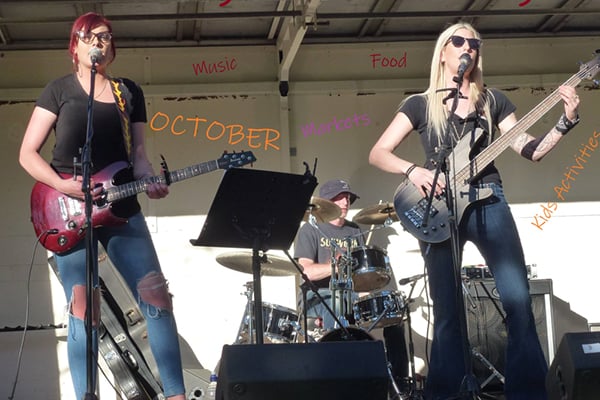 Spring in the Springs 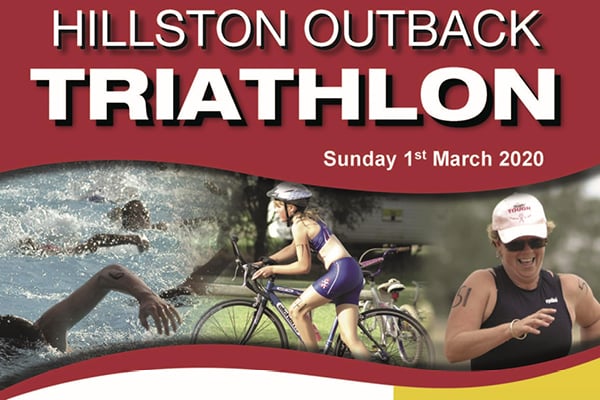 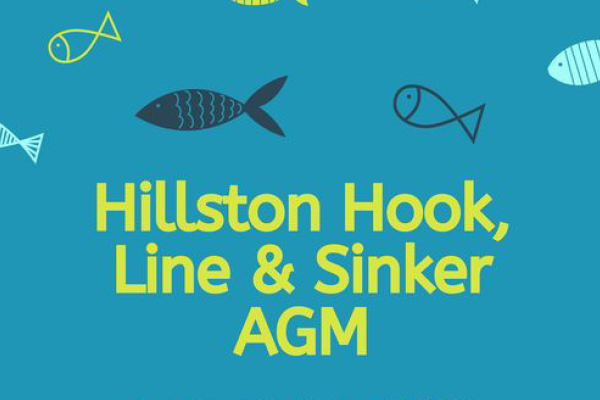 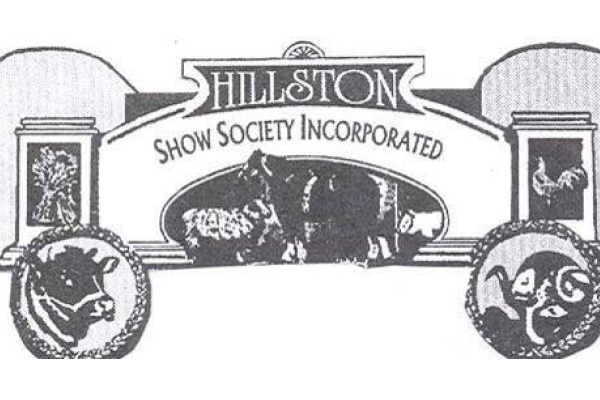