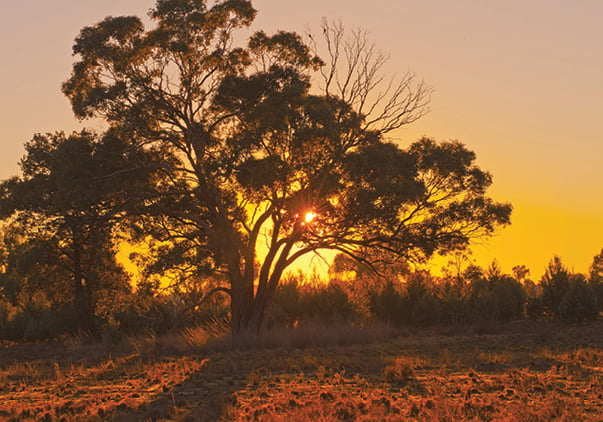 Welcome to Cobar – the jewel of Outback New South Wales, truly a remarkable part of Australia where the hospitality of locals is legendary.

Cobar is situated on the crossroads of the Kidman Way and the Barrier Highway. The Shire covers an area of 44,070km2. The town is a busy and prosperous place with a mixture of beautiful old and modern buildings, chronicling Cobar’s course through almost 150 years. 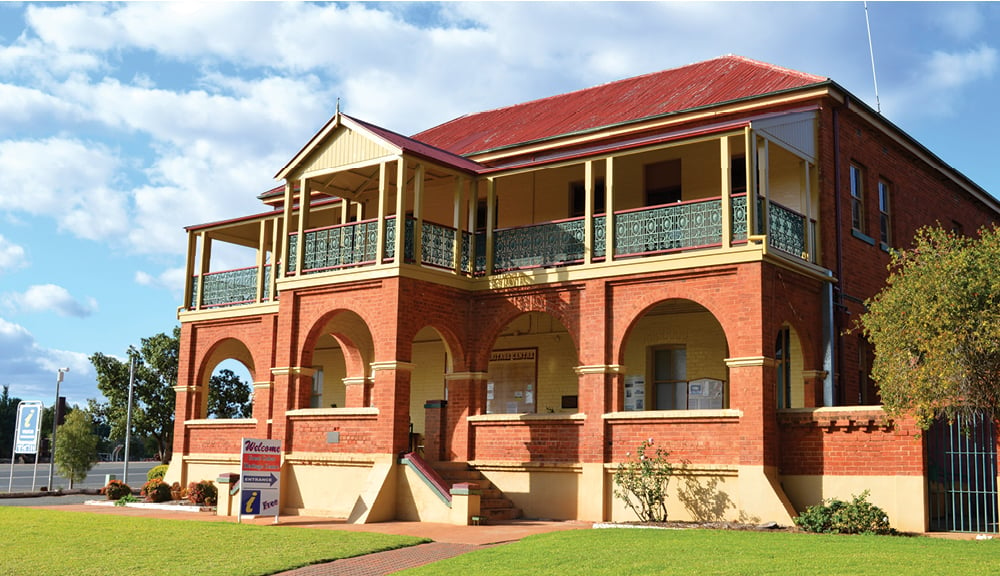 On a clear western night, travellers approaching Cobar could see a sky filled with blazing red light and intermittent splashes of silver and gold. It was 1911, and they were seeing the Great Cobar Copper Mine smelter at its height.  In its boom years, Cobar had a population topping 15,000. They were miners and graziers, business men and women, labourers, developers and entrepreneurs, hard-working folk who built the Great Cobar Copper Mine into a national showcase of industrial technology and turned the town into a byword for success. At its height, the Great Cobar led Australia in the production of copper, processing ore at the rate of 1,000 tons per day. Record quantities of rich gold deposits and other minerals were also discovered in the immediate vicinity.

Museum visitors can explore the building and the extensive yard displays, peeling back layers of mining, pastoral, Aboriginal and social history.  What will be your highlight? – the balcony view, the stunning mineral display, the intriguing “mystery” objects, the Royal Far West Railway Carriage… there is so much to see. Only 3km from town, a sealed road takes you to the Fort Bourke Lookout.  The lookout provides dramatic panoramic views of the town and surrounds from a platform that is 150m above the floor of the New Cobar Open Cut Gold Mine. The rich mineral belt of Cobar is clearly visible as you look out and down, down, down. Photographs and information boards tell you all about the history of this fascinating operation. 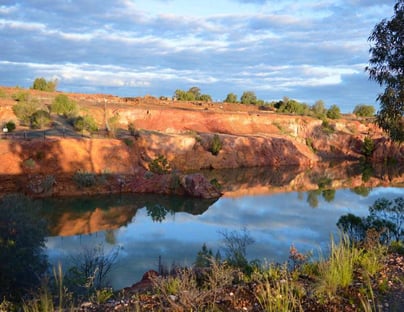 The open-cut has seen many Cobar locals take a dip there on a sweltering Summer’s day and many children, in decades past, have learned to swim in it’s blue-green waters. The open-cut has been a place of discovery for many generations of Cobar children. Kids collected pigeon eggs from the old mine shafts, and herds of goats lived there at one time. The open-cut was created by men who were employed over 100 years ago to undertake the back-breaking job of digging the huge hole. Using picks and shovels and horse and cart, the men removed rock from this quarry to be used as backfill for the underground mine stops in the “cut and fill” method. 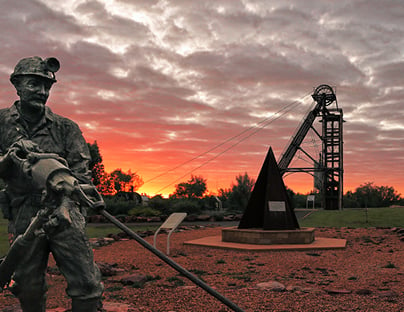 Just over the road from the Great Cobar Heritage Centre, the park was completed in August 2002 to commemorate the miners who lost their lives in Cobar mines. Some of the objects which can be viewed at the park are: a two metre bronze sculpture of a miner, a restored stamper battery from the Mount Boppy Mine, a fifteen metre high poppet-head from the New Cobar Mine, a loader from the CSA Mine and the headframe and winder from the Old Chesney Mine. The Mt Grenfell Historic Site is located 67 kilometres north-west of Cobar on the Barrier Highway. The site, managed by the NSW National Parks and Wildlife Service, is accessed by turning off the highway at the 40 kilometres turn-off. The road is un-sealed for the next 27 kilometres. This road is good, but access by caravans or buses is not recommended. Mt Grenfell features wonderful examples of ancient Aboriginal rock art by the local Wongaibon people. Visitors will also find scarred trees, ochre pits and a waterhole, testimony to the region’s Aboriginal heritage. Three art sites, featuring interpretive signage and within easy walking distance to the main parking area make this site accessible for every visitor. 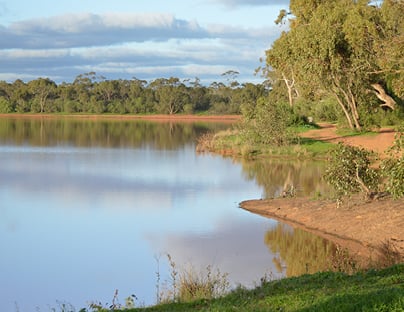 The Old Reservoir and Devil’s Rock

For many decades Cobar had no permanent water supply, although an area approximately 3 kilometres north of Cobar and called the “Old Res”, was Cobar’s first water supply. Due to the sporadic nature of rain, lack of water was a big problem for Cobar residents for many years. Water was delivered to Cobar residents by train up until the 1960’s when the pipeline from Nyngan was completed. Today the “Old Res” is used for recreation and water sport. Located near the “Old Res”, Devil’s Rock is an ancient rock formation which features strongly in Aboriginal legend. It was here that the Ngemba people carried out their ceremonial rites. Access to Devil’s Rock is via a 1 kilometre walking track from the “Old Res”. A large variety of bird-life and wild-life can be observed in this area. 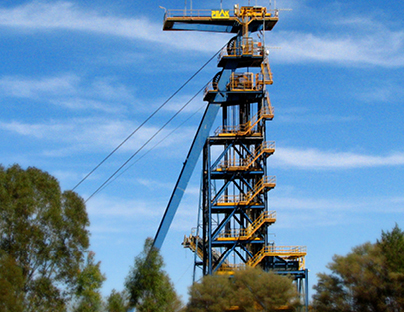 Eight kilometres South of Cobar, on the Kidman Way, is the site of Peak Gold Mines. The original Peak Gold Mine was opened in 1896 and in 1906 was purchased by the Great Cobar Copper Mining Co. At this time, underground mining only proceeded to a depth of approximately 90 metres. Following the closure in 1920 of the Great Cobar Copper Mining Co., small operators worked the Peak mines on and off until the early 1950’s. In the 1970’s Cobar Mines Pty Ltd diamond drilling exploration program located high grade gold in the deeper mineral zones of the Peak. 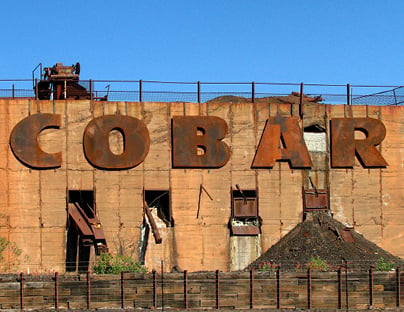 Cobar’s earliest smelters were located in the area  of Lewis Street. In the early 1870’s, Lewis Street  used to be the main road to Wrightville, an early  “suburb” on the southern side of Cobar township.  Lewis Street ran along the west side of the  Open-cut and around the slag dump, behind the  Shire depot to near where the present Rugby  Union Oval is located. The slag dump is the end  product of some fifty years of copper smelting at  the Great Cobar Copper Mine. Samples taken from  the slag dump contain about 2% copper but  because of the difficult process of extraction, the  slag is crushed and used as road base on Shire  roads. Please contact the Cobar Heritage Centre  for more information on (02) 6836 2448. 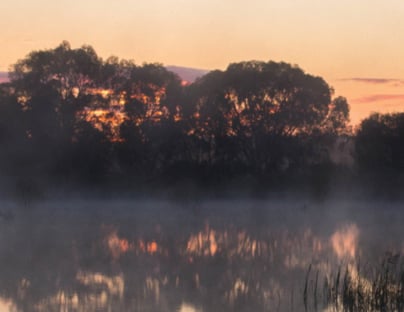 The recently sealed walk starts at the Great Cobar  Heritage Centre and moves south along Lewis  Street and the edge of the Open Cut, past the Slag  Dump and around the back of the Golf Course in  front of the Rugby Union Oval. The track winds  over the bank of a small ground tank past the  Rugby Union Oval and through scrub and bush  before reaching the “Newey” or New Tank. It  does a loop on the bank of the New Tank and  continues around the New Tank and drops off into  Tindera Street and Woodiwiss Avenue and back  into the CBD. Alternatively, the walk continues  south behind Jones Drive and links up with a  bicycle/walking path that leads about 2km south.  The walker then returns north into town. The  walk can be completed comfortably in  approximately 2 hours.  Maps of the Centenary of Federation Walk can be  obtained at the Great Cobar Heritage Centre. 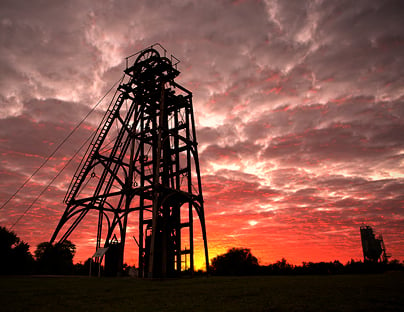 Founded as the Great Cobar Copper Mining Co in 1870, it was one of the largest mining and processing operations in the world at the time. The Great Cobar Mine situated on a slight ridge and facing West over the Cobar township, would have been a magnificent sight. Huge smelters, a 64 metre chimney stack and electric generators supplied lighting for the whole town. Over 2000 employees were engaged in mining, wood carting and smelting at the height of the activity. The main mine shafts of the Great Cobar, located south of the Museum building and now fenced off, have deep shafts running down to 430 metres. Remains of the smelter foundations are visible from the top of the hill, east of the Heritage Centre. 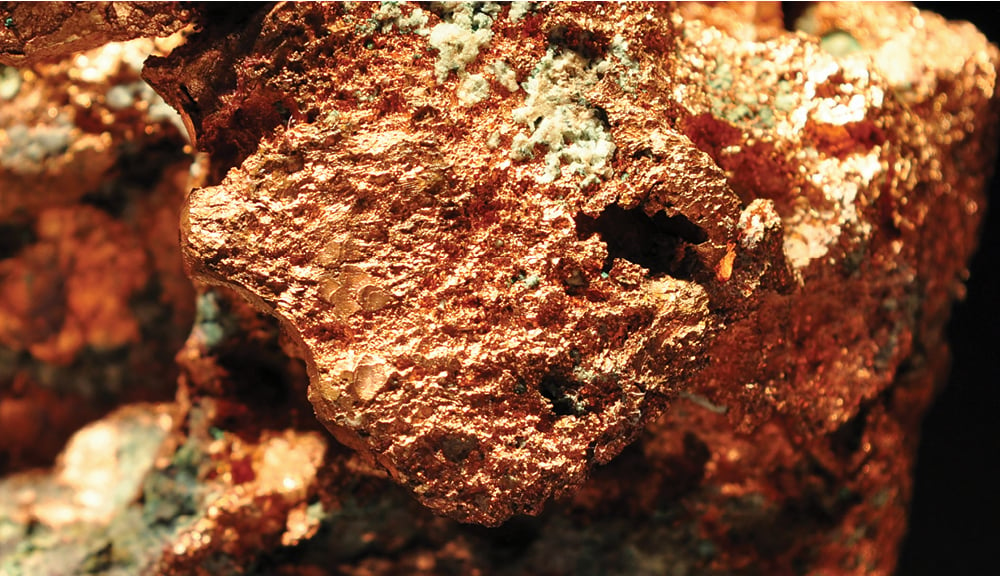 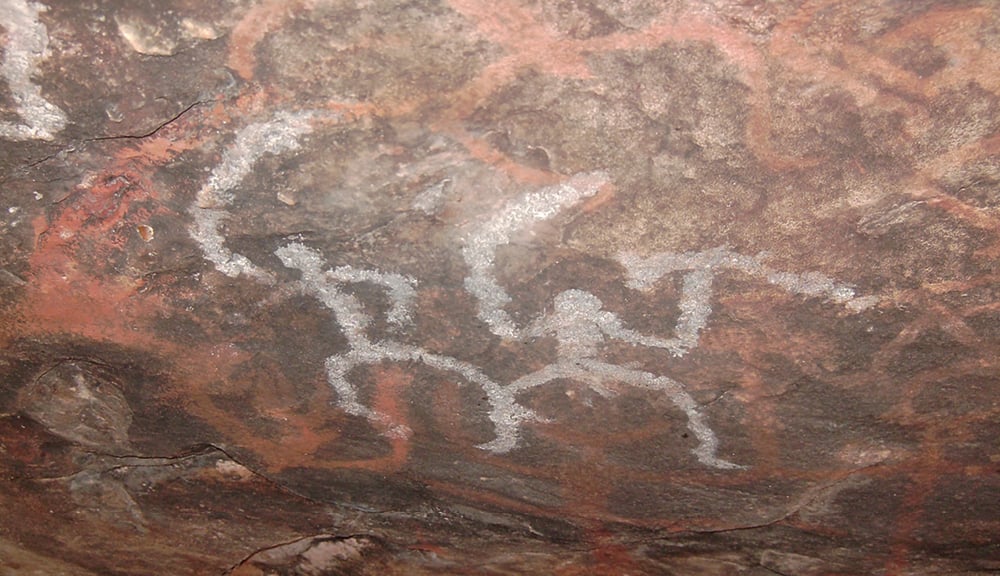 Our Villages and Surrounds

Gold was first discovered in Canbelego in 1889, but it wasn’t until about 1901 that the Mount Boppy Mine went into production. By 1905, it was considered the leading gold producer in New South Wales. The Mount Boppy Mine closed in 1922 and Canbelego became a sleepy little village with the relics of its mining past evident.

A well-formed unsealed road links Canbelego to Nymagee. It is worth the drive to go through the very pretty hills at the Gap and arrive in the village, whose name is an Aboriginal language word meaning ‘surrounded by hills’. Once home to over 2,000 people, at least half of whom were Chinese, Nymagee now has a population of about 150.

Euabalong, founded in the 1870s, is a village of around 150 people  The Lachlan River flows by the town and is a well-known place to catch ‘the big one’.

Mt Hope was another copper town with mining starting in 1874. By 1882, the mine employed 200 men and the town had a population of 800 with four hotels, a post office, savings bank, a billiard room, boxing saloon, at least four butchers and three bakers.

‘The Village of the Flood Plain’ aptly describes Tilpa. It is situated on the western bank of the Darling River and is surrounded by large pastoral properties with extensive merino flocks. The Darling River is a popular fishing spot with cod, perch, catfish and bream for the keen angler. Tilpa is a perfect example of an outback village, renowned for its hospitality, wildlife and awe-inspiring landscape. 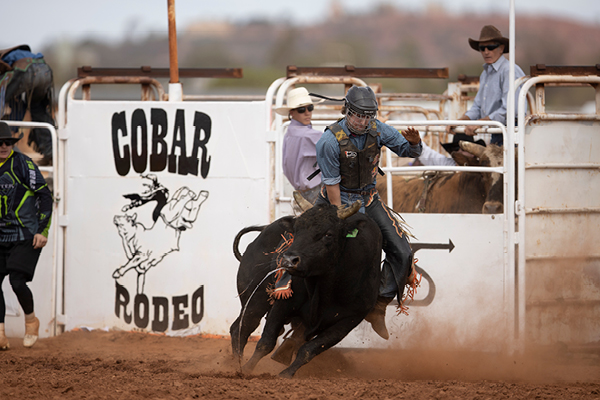 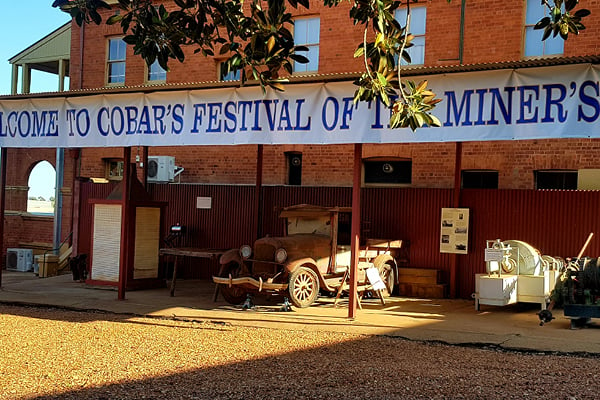 Festival of the Miners Ghost 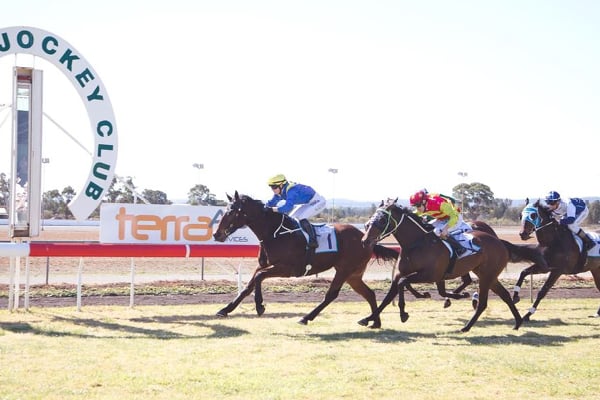 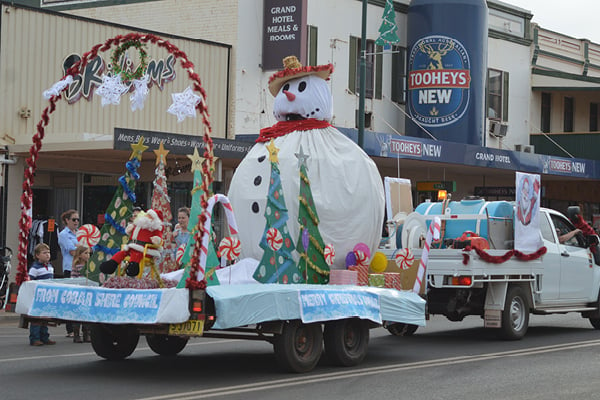